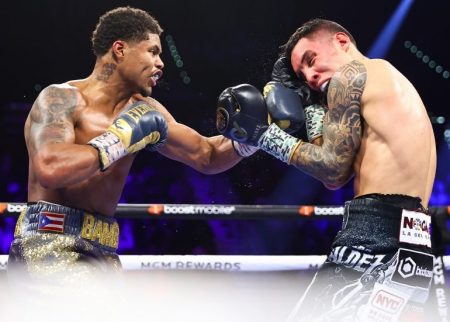 A superstar was born. WBO junior lightweight world champion Shakur Stevenson outboxed and outfoxed WBC champion Oscar Valdez via unanimous decision (118-109 2x and 117-110) Saturday evening in from of 10,102 fans at the MGM Grand Garden Arena. With the win, Stevenson earned the Ring Magazine title and status as the division’s top dog.

Stevenson (18-0, 9 KOs) established the southpaw jab in the early going, and Valdez (30-1, 23 KOs) could not get his offense going outside of pockets of success in the third round. In the sixth, Stevenson spun Valdez into the ropes and knocked him down with a right hand.

It was all Stevenson in the second half of the fight, who built an insurmountable lead on the cards. Valdez won the 12th round on all three judges’ cards, but it was too little, too late. Stevenson asserted his dominance and is now the 130-pound king.

“I want to collect all the belts at 130 and become undisputed. I deserve to be a superstar, so that’s what I gotta do.”

With this win, Stevenson improved his record to 18-0, with 9 knockouts. Oscar Valdez lost his unbeaten record, leaving his record at 30-1, with 23 knockouts.