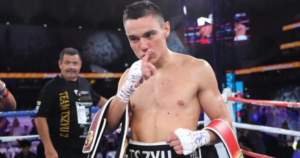 The Australian is the number one contender for the WBO Jr. Middleweight belt.

The Australian dropped Hogan, and continued to land heavy blows until Hogan’s camp threw in the towel with seconds remaining of the round.

The 26-year-old retained his WBO Global title and moved onto a record of 18 wins and zero losses, and could soon find himself in contention for major title fights.

Tszyu defeated his Irish-born rival with constant shots to the body, and finally sent him to the canvas in the fifth before Hogan’s corner gave in.

Already ranked as the number one contender by the WBO, he may now attempt to gain a fight against title holder Brian Castano.

“I could see it from round two,” said the winner after the fight. “We knew we had another seven, eight rounds so we paced ourselves. It’s sink or swim and we swam.

“The caliber of my opponent, a two-time title challenger who I got out of there quicker than [Jermall] Charlo—not a bad achievement,” said Tszyu, who now wants to bring a belt back to Australia.

“We want the real straps,” claimed Tszyu. “And we want them here in Australia.”