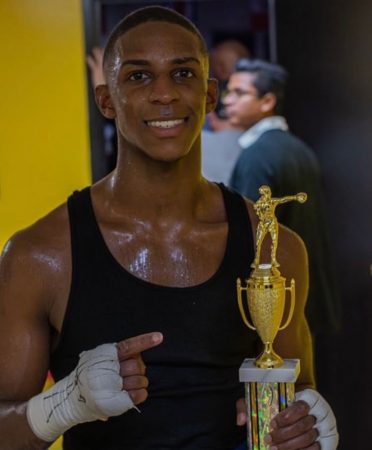 2020 New England Golden Gloves champion David Ribeiro, fighting out of Brockton (MA), is preparing once again for his long-awaited professional debut, scheduled for June 25th, on the evening portion of “Road 2 Stardom” card, at Sheraton Hotel in Framingham.

“Road 2 Stardom”, presented by Granite Chin Promotions, is the first day-night professional boxing doubleheader in Massachusetts history. Boxing fans will be available to watch both shows via live stream at BXNGTV.COM for only $24.99.

Ribeiro was all set to make his pro debut back on May 7th in Bridgewater (MA), but his opponent never got on the phone, cancelling their fight, and disappointing the ready-to-go Ribeiro.

“I didn’t find out until the day of the weigh in,” Ribeiro explained. “I was devastated. I was on weight and ready to put on an exciting show. I had sold all my tickets. It was a great moment until I got the news. I’ll be even more prepared this time because the cancellation motivated me to work even harder. I had been in training camp for 8 weeks. There’s no easy way to get ready for a fight. I’ve been working on my strength and conditioning, cardio, and nutrition. I’ve been sparring some tough people. The only difference is my opponent.”

Ribeiro is slated to face Rakim Johnson (6-17-1, 5 KOs), of Indianapolis, in a 4-round bout. The Brockton fighter could have fought an easier opponent in his first pro fight, certainly less experienced than the 24-fight Johnson.

“It doesn’t matter to me,” Ribeiro said. “My team picks my opponent. I know what I bring to the table. I know what I’m capable of and I’m very confident.

“The excitement is still there. Bridgewater is only 20 minutes from my home, Framingham is around 40, but I still have people buying tickets. They’re willing to travel to support me.”

So much for a fighter only having one pro debut. It’s like “Groundhog Day” for the latest fighter from the City of Champions (Brockton), David Ribeiro, who can’t wait to get into the ring.

“I was heartbroken when I got the call in May from Dave’s opponent that he got cold feet and skipped out on the flight,”

Granite Chin president Chris Traietti commented. “Well, heartbroken, enraged, and a few other emotions to go with it. Making that call knowing how disappointed he was going to be, made me sick to my stomach. But, like the gentleman he is, Dave took it in stride and didn’t let it get him down. He is staying ready, and I have no doubt he is going to make a statement on June 25th. Dave was a high-level amateur with a ton of confidence. We are going to move him along rapidly, but in control and within 18 months, you will see him fighting on TV.”

The evening card will be headlined by undefeated Holyoke (MA) welterweight prospect Denzel “Double Impact” Whitley (8-0, 6 KOs), 26, who will headline for the first time in the 6-round main event versus Brazilian Maycon Oller Da Silva (1-4, 1 KO).

In the potential Fight of the Night, Massachusetts intra-state rivals Nathan Balakin (3-1, 1 KO), of Tyngsboro, and Attleboro’s Bryan Urday (2-1) square off in the 6-round co-featured event for the vacant Massachusetts Welterweight Championship.

Undefeated Floridian welterweight Josniel “TG” Castro (8-0, 6 KOs) returns again to New England, where  all of his pro fights have been held, to meet Bryan Goldsby (5-16) in a 6-round bout.

Woburn (MA) junior lightweight Julien “Black Dragon” Baptiste (3-2, 2 KOs) will seek revenge in a rematch against Alfred “Keenan” Raymond (1-2), of Warwick (RI), who won their first encounter last November by way of a 4-round split decision. They’ll be fighting in a scheduled 6-rounder on June 25th.