Where is Deontay Wilder? The Heavyweight Mess That Surrounds Wilder, Fury, Joshua & Whyte 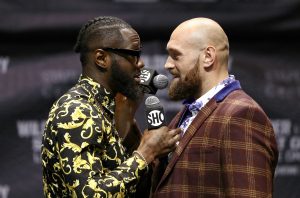 Where is Deontay Wilder?

This weekend the boxing world have a keen eye on the heavyweight clash between Dillian Whyte vs Alexander Povetkin, the winner to be accommodated by the WBC for their heavyweight crown with a deadline of taking place, by the end of February 2021. Not that Whyte needs a deciding match (he has been mandatory challenger for way over 1000 days) and his shot is way overdue. That is another story and is what it is.

All the heavyweights that are currently in this merry-go-round of who will fight who, when by and what for is ripe on social media and enforced by various interviews etc. One person (that appears) to be quiet in all of this is former WBC champion Deontay Wilder. Unusually quiet?

A quick look at his Twitter account shows nothing to go by. The past three months posts show a picture of him on a lovely looking motorbike and going on about straddling his horse and a post about one of the recent hot topics of black lives matter. For Deontay this is oddly quiet?

With this in mind, Tyson Fury is continuing throwing in his pennies worth Tweeting “Where you at mush? The clock is ticking!! I’m not gonna wait forever!!! There are other bums in the division that I want to eat for breakfast.”

Maybe Wilder (42-1-1, 41 KO’s) has realised he has completely embarrassed himself with the tirade of excuses that left his lips as to the reason for the loss against Fury (30-0, 21 KO’s). I like Wilder and this is not meant to be a keyboard bashing session against him but.

The mooted bout for the third fight with Fury, and nothing is concrete, is December 2020, I cannot see how this will pan out. Let’s say they do fight at the end of December, how will the victor be able to face the winner of Whyte vs Povetkin eight weeks later? I sense the fight with Fury vs Wilder will happen (it has to contractually) but feel the title will then be vacated with the victor of Whyte vs Povetkin being installed as champion.

Unless you have been hiding under a rock, the world wants to see Joshua vs Fury. For this to happen, Joshua needs to defeat Kubrat Pulev (no set date but December again is likely) and Fury is likely to defeat Wilder (based on the two prior fights) and all that Whyte will do is spoil that plan which is a shame as Whyte has more than earned his position yet the fans and boxing needs Joshua vs Fury. All this will do is stop the fragmented title belts coming together for the first time in a long time with Joshua holding the WBA, IBF and WBO belts whilst Fury has the WBC (and Ring magazine belt). Shame.

“He doesn’t show any interest in a fight with me. They are already trying to put obstacles in the way of fighting me. He said when he beat Wilder that he would fight me because I deserved it. Blah blah blah. Typical Fury, he says one thing today and one thing tomorrow. Hopefully he does fight me because it’s a big fight, and winnable for me.”

As discussed in a prior post, what is the answer? There isn’t one that will keep all happy (including the fans) but full circle and back to Wilder, with him being so uncharacteristically quiet doesn’t help with the state of play with all. Not that social media baiting provides clarity, at least it clarifies direction.

The biggest problem with staging the third installment of Fury vs Wilder is the money involved, or the lack of it. No live gate equals lower money on the table.

Fury’s promoters, Bob Arum and Frank Warren, would prefer to have some form of a crowd for the bout thus raising the fighters purses. The rematch generated a gate of nearly $17 million which would help all move on. But again, where is Wilder? Is it money that is the issue so by being quiet and thus delaying all will higher the purse(s).

Direction is needed even if it in the form of ranting on social media. Does he REALLY want the third fight? Is he hungry for revenge? Only he knows what is going on in his head and with him giving nothing away (which will please some peoples ears) does not help the heavyweight merry-go-round.

Will Deontay Wilder please stand up….for once we want to hear you.