Why we need to stop giving Tyson Fury a hard time 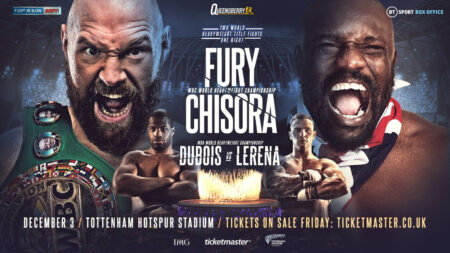 Why We Need To Stop Giving Tyson Fury a Hard Time

When you are the champion in any weight class of boxing, you automatically have a target on your back. In the case of Tyson Fury, however, it has been a long time since he has been the hunted, given his openness to fighting anyone, and his ease in getting it done. In fact, it is fair to say that with the exception of fighting Anthony Joshua, Fury has pretty much cleared out the division. On December 3rd this year, Fury will take on Derek Chisora in what will be a trilogy fight. Currently, if you look at a site like https://www.betstation.com/sports-betting-sites/ you’ll find that Fury is a whopping 1/33 to win that fight. This has drawn much criticism from the boxing world, that Fury is not taking the big fights.

Here, however, is why all of those who are critical of Fury, are wrong.

We have to remember that Fury had said that he was retiring following the Dillian Whyte fight, yet he interested boxing fans when he said that he would fight Anthony Joshua. Throughout a series of social media posts and official announcements, we discovered that Joshua was offered a very sweet deal, for a fight that many fans didn’t actually think that he deserved. Joshua was once the champion but has now lost 3 fights in total, including 2 against Oleksandr Usyk. The fight, as many thought, fell through, but not because of Fury. The consensus is that Joshua is worried his career will be all but over should he lose to Fury.

The perfect match-up for Fury right now is surely Usyk who is unbeaten like Fury and currently holds the WBA (Super), IBF, WBO, IBO, and The Ring heavyweight titles. This would give Fury a chance to also put his WBC belt on the line, and attempt to unify the division. Whilst there is no doubt that Fury would take the fight, it was Usyk’s camp that said that he wouldn’t be fighting for at least 6 months. A lot of fight fans suggest that Fury should wait until that fight, but why should he remain inactive simply because of what the fans want?

It is entirely possible of course that Fury steamrolls Chisora, but we cannot ignore the steel and fortitude that Chisora has. After all, for those who are saying Fury needs to fight Joshua, that is a man who was beaten twice by Usyk having gone the distance. Chisora also went a full 12 rounds with Usyk and lost by a decision, not bad for someone who has been written off! Ultimately there is sure to be a little bit of charity on Fury’s part here, to give a fellow boxer with whom he has fought twice, a nice payday towards the end of his career.

Fury is active, unafraid and a great of our lifetime, he deserves to be treated better.

Christian Mbilli faces Vaughn Alexander in Nantes on December 17 A change is as good as a rest for Dempsey Madden, returns Nov.18