Whyte vs. Franklin, Gorman vs. Wardley in London this Saturday 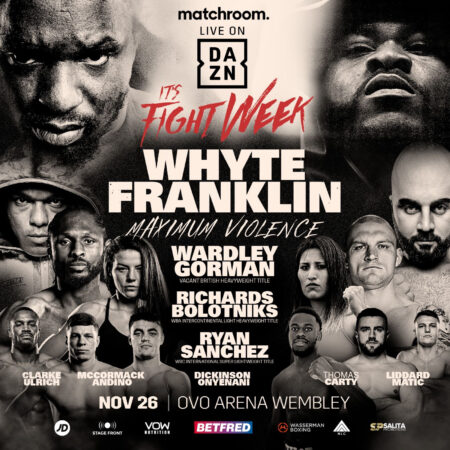 Dillian Whyte will face undefeated American contender Jermaine Franklin on his highly anticipated return to the ring this Saturday, November 26 at the OVO Arena, Wembley, live worldwide on DAZN.

‘The Body Snatcher’ (28-3, 19 KOs) fell short in his challenge for Tyson Fury’s WBC Heavyweight World Title at Wembley Stadium in April, succumbing to a sixth-round stoppage defeat in front of over 90,000 fans.

Brixton’s big-hitting former Interim WBC Heavyweight World Champion, 35, is set to fight at the OVO Arena, Wembley for the first time in his career as he looks to kickstart his journey towards a second shot at world honours.

Michigan’s Franklin (21-0, 14 KOs) is unbeaten in 21 fights since joining the professional ranks in April 2015 and the 28-year-old will be fighting outside of the USA for the first time in his professional career when he meets Whyte over 12 rounds in London.

Once described as America’s next Heavyweight hope, Franklin ended a two-and-a-half-year layoff by stopping Houston’s Rodney Moore in five rounds at McBride Hall in Gary, Indiana in May to extend his perfect record.

Wardley, 27, stopped Simon Vallily in three rounds of their hotly anticipated grudge match to pick up the vacant English Title at Fight Camp in August 2020 before blitzing Nick Webb inside one round to retain the belt a year later at Matchroom’s HQ in Essex.

Gorman, whose only loss came at the hands of Daniel Dubois back in July 2019, dusted off 15 months of ringrust in his last fight in June, bulldozing through Tomas Salek in just 81 seconds to win the IBF Intercontinental Title at the M&S Bank Arena in Liverpool.

Crystal Palace’s Richards put in a spirited display as he pushed WBA Champion Dmitry Bivol all the way in his first World Title attempt in May 2021. ‘Spider’ returned to winning ways by impressively stopping Marek Matyja in six rounds before being outpointed by South London rival Joshua Buatsi at The O2 earlier this year.

Bolotniks, who holds wins over Steven Ward and Hosea Burton, will be familiar to UK fight fans following his brave battle with Olympic Bronze Medallist Buatsi at Matchroom’s second installment of Fight Camp last summer – where he was eventually stopped in the eleventh round of their WBA International Title clash.

Former Team GB star Ryan goes for her second title in the pro ranks after exacting revenge over Erica Anabella Farias – the only woman to beat her – at the Sheffield Arena in August to pick up the vacant WBC International Super-Lightweight Title.

“It’s great to be back, doing what I love doing,” said Whyte. “I can’t wait to get into the ring and show the world that when push comes to shove I can get right back up in Wembley and remind everyone why I was WBC number one for over four years.

“I’m super hyped to fight in the UK,” said Franklin. “They love boxing and I plan on making a statement when I beat Dillian. I want them to be loud and love my boxing style and have them embrace me as the people’s champ. The world will see the real Jermaine Franklin Jr.

“Dillian is a warrior. He has heart and he’s been with the best. It’s time for him to step aside and let the ‘989 Assassin’ make him body number 22 on my body count. The kind of fight I expect is a brawl. Dillian wants to prove he’s got something left in the tank. I want to show him I’m the future of boxing and for USA Heavyweights.

“When I beat Dillian I want this victory to be followed with a title shot or a major fight to take me to the title. I’m like Holyfield. I’m a warrior. I’m from the hood. You have to take my heart and that will never happen in the ring. I have speed and power. I have no problem taking a punch to land my own. I am America’s next Heavyweight Champion.”

“I’m buzzing to be fighting for the British Title, I’ve had my eyes set on this belt for so long and I can’t wait to get my hands on it,” said Wardley. “Nathan Gorman’s a good fighter, but nothing is going to stop me from checking off this next milestone of my career. I thrive under the pressure of big fights like this, I live for it, there’ll be no better feeling than standing over him with my hand raised. I take my opportunities when they come, I’m not going to need any second chances like he did.

“I’ve never trained harder, I’ve never been fitter, it’s like the stars have aligned for this camp and everything is coming together perfectly. I’ve come on leaps and bounds with the new addition to my coaching team and I’m technically improving every day. That mixed with my natural athleticism and serious KO power, there’s nothing Nathan can bring to stop me.”

“It’s my second opportunity fighting for the British Title, so I’ve got to take it with both hands and this time it isn’t going anywhere other than back home with me,” said Gorman. “It’s against Fabio Wardley, and I know I’ll be facing the best Wardley that has ever entered that ring. Unfortunately for him, that will be met with the best Nathan Gorman, who is improving every second he spends in that gym.

“The thing I have that he doesn’t possess is the experience. I’ve already been in there with tougher questions that I have come through and answered, whereas I’m his acid test. It’ll be interesting if he lasts longer than rounds 5 or 6, he has a cut eye, and things aren’t going his way. He isn’t going to be able to match what I bring.”

“I’m delighted to welcome one of the biggest stars in Heavyweight boxing Dillian Whyte to the DAZN platform,” said Matchroom Sport Chairman Eddie Hearn. “The Body Snatcher is hungrier than ever after falling short in his first ever World Title challenge earlier this year and he’s jumping straight back in at the deep end against a young and dangerous fighter in Jermaine Franklin. Expect Maximum Violence in an England vs. USA main event.

“We’ve got an incredible undercard in store for you at the OVO Arena, Wembley on November 26 including the vacant British Heavyweight Title clash between Fabio Wardley and Nathan Gorman, a brilliant match-up at 175lbs between former World Title challenger Craig Richards and Ricards Bolotniks and Sandy Ryan going for another title against tough Mexican Magali Rodriguez. Catch it all live worldwide on DAZN.”

“Nathan has made a fantastic comeback this year having had 18-months out, with the quick capture of an IBF Title being proof of that,” said Wasserman’s Head of Global Boxing, Kalle Sauerland.

“Of course, the British Heavyweight Championship is one of the most respected titles in boxing and will propel him on to the world stage even further. We’re very confident Nathan will get the job done on November 26 and set up a HUGE 2023.”

“We are incredibly excited to welcome Dillian Whyte, one of the biggest names in Heavyweight boxing, to the platform on November 26,” said Joseph Markowski, CEO DAZN North America. “Jermaine Franklin will be a tough test for Dillian with the fight topping a stacked card full of action-packed matchups including Wardley vs. Gorman, Richards vs. Bolotniks and of course a future star in Sandy Ryan. Do not miss this fight! Live and exclusive and part of your DAZN subscription worldwide.”