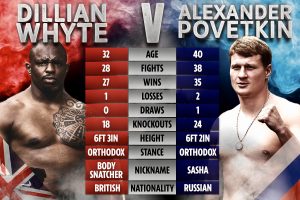 We all hate a mismatch but every once in a while a truly 50-50 fight comes along and when it is a heavyweight bout that falls into this category we salivate the idea of a brutal bout at the highest level. So here it is, Dillian Whyte vs Alexander Povetkin.

The first point I will get out of the way (and it may not be a popular one), if this bout had taken place 10 years ago (when he was at his peak) I would have favoured a Povetkin win 60/40. The amateur pedigree where he won an Olympic Gold medal (super heavyweight) along with the countless other amateur accolades he won gave him an advantage over all he faced until running into Wladimir Klitschko in 2013 (Klitschko near enough hugged him to a unanimous points victory).

His professional whos-who of heavyweight victories have included the likes of Larry Donald, Chris Byrd, Eddie Chambers, Ruslan Chagaev, Marco Huck, Hasim Rahman, Manuel Charr, Carlos Takam, Mike Perez and Hughie Fury. His only two losses were to Klitschko (2013) and Anthony Joshua (2018). There are many more notable names over a period of professional boxing (he turned pro in 2005) but with this in mind, he is now aged 40 and is past his best.

Turning pro in 2011, whilst his amateur background cannot compare to Povetkin’s (most can’t) since losing to Anthony Joshua in 2015 (7th round TKO) his list of victories have improved and has helped him in his development as a fighter with names such as Dereck Chisora (twice), Robert Helenius, Joseph Parker and Oscar Rivas. A good list of scalps that included battle tested, top flight and an unbeaten fighter. Whyte is at his peak.

I hate giving predictions, especially when they are so well matched and as is the case with all boxing matches, it can take just one punch to turn it all around. But, I must.

Whyte looked strong at the weigh-in. As a comparison, Whyte scaled 242lbs for the second Chisora fight and 258lbs for the Joseph Parker fight. He is motivated and has appeared to taken this fight seriously. Povetkin weighed 5lbs lighter than his last fight in December against Mike Hunter, he also looks up for the challenge and I think this is a case of a fighter that has his last hurrah and the one fight that he has left in him.

Style: they will gel. I think Whyte will come out aggressive with Povetkin countering well off the back foot. Neither fighter usually takes a back step, Povetkin will be the one.

Power: Whyte will have the slight advantage as Povetkin’s power has slightly diminished over the past 3 years or so.

Technique: Povetkin will hold the advantage (and would do over most) with his undoubted extensive background. This does not detract from Whyte who has improved dramatically.

Endurance: Whyte holds the key to this area. I might of been apprehensive in stating this but having seen the weigh-in he will endure better tonight as opposed to other fights where his conditioning has been questionable. Povetkin does not have the same engine he once had. At 40, he may struggle late on and especially if Whyte uses his weight to his advantage by making it a physical fight.

Speed: having reviewed Povetkin’s last 3 fights (again) I think he will hold the Sleight advantage in this area especially at the weight he has come in at.

Chin: advantage Whyte. With age again, Povetkin’s whiskers has recently looked not what he was. Whyte is solid. I can only recall Whyte down against Joseph Parker (late) and was more from fatigue and against Joshua (KO loss).

Outcome: Whyte by a grueling unanimous points decision or late KO. Povetkin even at 40 has the tools to upset the Whyte band wagon and take his WBC mandatory No.1 position. But, as you know, anything can happen. This is not a confident pick but pushed for an outcome the “body snatcher” will slowly grind down Povetkin, switching his attack to the head and negating all that the aged former champion has to offer at 40.

I for one gave Persoon the first fight with Taylor receiving the nod from the judges that was deemed unpopular by most. Taylor is the fighter of the two than can adjust and consequentially improve.

Another grueling fight is headed their way with Taylor out speeding and out boxing Persoon who will always threaten as she continually moves forward.

This time it will be a popular decision. given by the judges

50/50. Clay wins a close decision that could be unpopular with most at ringside.

All of Bebic’s 3 fights were against opponents with losing records, so it is hard to gauge. Whilst Winters is small for a heavyweight, if his chin holds up he should be able to claim a points victory. You can only go by what is known. But, Babic appears strong so a KO would not be surprising against the smaller man.

Cullen is the more experienced and known quantity of the two fighters. He seems headed to a points victory against a fighter with one loss (on points).