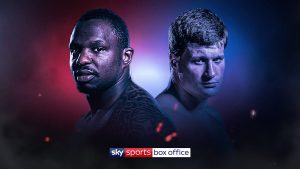 Dillian Whyte and Alexander Povetkin fight week is finally here. It is the most significant heavyweight fight since COVID-19, a fight Dillian Whyte did not have to take. He risks his WBC silver heavyweight belt and his mandatory No.1 ranking, patiently waiting for his shot at one or all of the heavyweight title belts.

In Povetkin (35-2-1, 24 KO’s), he takes on the 2004 Olympic heavyweight gold medalist and former WBA heavyweight champion (2011-2013) who has a boxing A-Z resume and the who’s who of the modern heavyweights. With only two defeats, the first against Vladimir Klitschko in 2013 then Anthony Joshua in 2018, even at age 40, this bout is not a formality. Though past his best, what he has left is the question as he is in the opposing corner to Whyte this Saturday.

So what does Povetkin have left and how good really is Whyte? In short, you have Whyte as the No.1 contender with one loss to Joshua against an aging former elite heavyweight on the down slide, all this making an interesting match up and is a fight I will break down later on in the week.

On to Eddie Hearn with a few comments on this Saturday and the well documented merry-go-round of a situation that is currently going on between Tyson Fury, Deontay Wilder, Anthony Joshua and Whyte that is having to wait for his shot at any of the aforementioned:

“[The WBC Diamond title] is on the line for the first time. It’s still for the interim world heavyweight title, but also the Diamond belt. It’s the most important heavyweight fight this year by a mile. Alexander Povetkin can bowl in and become WBC mandatory just by winning this fight. Dillian Whyte has waited 1000 days. The winner of Fury against Wilder has to fight Dillian Whyte or Povetkin or vacate the belt,” Hearn told IFL TV.

“So if Fury wants to vacate and Dillian Whyte fights #1 or #2 for the title, he can fight AJ for the undisputed.”

The fight is this Saturday (August 22nd) and can be viewed on Sky Sports PPV and Dazn.