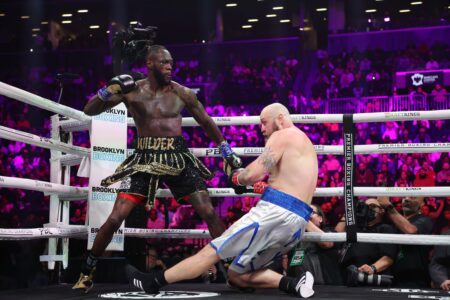 Boxing superstar and former longtime heavyweight champion Deontay “The Bronze Bomber” Wilder announced his return in grand fashion Saturday night, blasting out the top-rated Robert “The Nordic Nightmare” Helenius in the first round of their WBC Heavyweight Title Eliminator which headlined a FOX Sports PBC Pay-Per-View from Barclays Center in Brooklyn.

In his first fight since an epic trilogy with Tyson Fury, Wilder stepped into the ring for the first time in just over a year and quickly reminded the world why he’s one of the most feared punchers in boxing history.

“I set him up,” said Wilder. “I allowed him to reach and when he reached I attacked. It was a great fight. It’s been a good camp for me. We worked to make this fun for me. We work at this so much that it can just become a job. We made it fun again. We put in over 700 rounds and it paid off tonight big time.”

Headlining at Barclays Center for the fifth time in his career, Wilder added yet another devastating highlight to his resume at the arena in Brooklyn and credited the setting of the fight for adding inspiration leading to his triumph.

“It’s just amazing to be back in Brooklyn,” said Wilder. “It’s like a second home to me. It feels so good to be back. When I got off the plane, I felt the great energy and the love, and that’s all I needed.”

After a mostly cautious first round, in which Wilder only landed three punches according to CompuBox, Wilder caught a lunging Helenius with a short right hand that has ended the nights of numerous heavyweights over the last decade plus.

“It’s been a good camp for me,” said Wilder. “We worked to make this fun for me. We work at this so much that it can just become a job. We made it fun again. We put in over 700 rounds and it paid off tonight big time.”

Referee Mike Griffin quickly halted the action 2:57 into the round, as Wilder turned his attention toward a second reign as heavyweight world champion.

“I’ve been hearing rumors about (unified heavyweight champion) Oleksandr Usyk but he’s not here is he?” said Wilder. “When guys see these knockouts they turn the corner away from me. I’m ready for whatever. Whether it’s Andy Ruiz Jr. or Usyk, I’m ready. Deontay is back and the excitement in the heavyweight division is back.”

“This win felt good,” said Plant. “You’ve heard about how much he hates me, but my head and my heart is what won me this fight. I was in control the whole time. My coach told me to stay patient and ease in and that’s what we did. Then, boom!”

After a long war of words between the two rivals leading up to the fight, the contest was a tactical affair throughout, until Plant landed a flush left hook that emphatically put an end to their in-ring rivalry. Plant led on the scorecards 80-72 and 79-73 twice before referee Harvey Dock waived off the bout 2:57 into the round.

In his first fight with trainer Stephen “Breadman” Edwards, Plant continued to display the pristine boxing skills that have buoyed his run in the super middleweight division. He dominated the punch stats, landing 43% of his total punches, including a 43% clip on power punches.

Plant made his return to the ring after dropping an undisputed super middleweight title fight to Canelo Alvarez last November. With a statement victory on Saturday, Plant has set his sights on regaining his champion status and making marquee fights sooner than later.

“I’m ready for whatever comes next,” said Plant. “I’m going to spend some time with my family, but then I’m ready for the biggest fights that we can make.”

A heavyweight showdown on the pay-per-view saw Cuban contender Frank Sanchez (21-0, 14 KOs) keep his unbeaten record intact as he showed off his boxing prowess before displaying his power in stopping Puerto Rican Olympian Carlos Negron (25-4, 20 KOs) in the ninth round.

“I knew that the last three rounds I was going to step on the gas and knock him out late,” said Sanchez.

Trained by the renowned Joe Goossen, Sanchez began to turn up his offense in the second half of the fight, slowly battering Negron and causing swelling and bleeding that forced the doctors to check on Negron before round nine. From round six on, Sanchez out landed Negron 68 to 46, including 39 to 21 in power punches.

“We knew that Negron was going to be tough and he definitely gave it his all,” said Sanchez. “He was tough for nine rounds, but the knockout was inevitable. I have nothing but respect for Negrón, he fought a good fight. I just did what I had to do.”

Sanchez made sure to take advantage of his momentum and quickly unleashed a combination that sent Negron to the mat in the neutral corner. Negron was able to rise to his feet, but was met with heavy pressure from the charging Sanchez.

As the onslaught continued and Sanchez winged power punches on his weary opponent, eventually referee Ricky Gonzalez jumped in and called off the fight 1:36 into the round. After the fight, Sanchez expressed his desire to fight for a chance to become Cuba’s first ever heavyweight world champion.

“I’m a highly-rated fighter, so I feel like a mandatory shot for the world title is coming,” said Sanchez. “I’m just looking forward to fighting the best that the division has to offer. Hopefully the fans will get to see me in those big fights next year.”

In the pay-per-view opener, former bantamweight world champion Emmanuel Rodriguez (21-2, 13 KOs) won a technical decision, with the bout ending two seconds into round ten, in a rematch against the previously unbeaten Gary Antonio Russell (19-1, 12 KOs). After their August 2021 matchup ended in a no-contest due to a head butt in round one, the rematch was again called after a head butt, with this one occurring in round nine.

Rodriguez suffered the worst of the clash, but was able to rise to his feet and finish the round, before the fight was stopped by the ringside physician as round 10 began. Puerto Rico’s Rodriguez emerged victorious on the cards by scores of 100-90, 99-91 and 97-93.

“I’m going to get a little rest now, then I want to come back and fight for the world title,” said Rodriguez post-fight.

“He was the better fighter today,” said Russell. “I felt like he out pointed me. I thought I started to pick it up after the fifth round but it wasn’t enough.”

Russell brought an unbeaten record into the contest, and was looking for a signature victory to launch himself into title contention. However he was met with a stiff defense early, as Rodriguez found spots for powerful counter shots that staggered Russell in rounds one and four.

Rodriguez remained patient and nearly scored a knockout blow in round eight, landing a perfect straight counter right hand that put Russell on the mat. Rodriguez controlled the action throughout, out landing his opponent 120 to 73 overall, and 78 to 41 in power punches on his way to the win.

“If you get knocked down with a good shot, you obviously feel it,” said Russell. “People like to lie about that. But I was conscious and able to regain myself. It was the first time I was ever hurt in a fight, but I was prepared for it.”

“I knew that I was dominating the fight,” said Rodriguez. “When I knocked him down, I thought his corner should have stopped the fight. He wasn’t right at that moment.”

Prelims action on FS1 and FOX Deportes was topped by rising prospect Vito Mielnicki Jr. (13-1, 8 KOs) scoring a dominating unanimous decision victory over Limberth Ponce (19-6, 11 KOs) after 10 rounds of action. The 20-year-old controlled the pace throughout and easily out landed his opponent on his way to a triumph by scores of 98-92 and 99-91 twice.

Action on FS1 also featured rising lightweight contender Michel Rivera (24-0, 14 KOs) as he punctuated a dominating performance by dropping Jerry Perez (14-2, 11 KOs) in the final moment of their eight round duel, earning the unanimous decision by scores of 80-71 and 79-72 twice. In the opening bout on FS1, Gurgen Hovhannisyan (4-0, 4 KOs) remained unbeaten with a stoppage victory over Michael Coffie (13-3, 10 KOs), as the ringside physician advised referee Ricky Gonzalez to halt the action following round six.