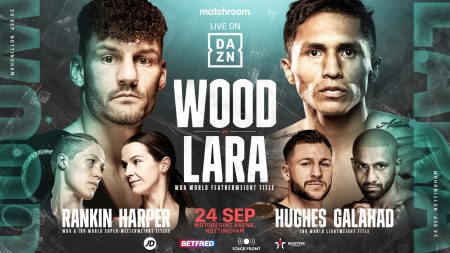 Wood (26-2, 16 KOs) memorably stopped Michael Conlan in the 12th and final round of his epic first defence of the WBA 126lbs title back in March, knocking the Irishman out of the ring in brutal fashion to end their Fight of the Year battle.

‘Leigh-thal’ was heavily dropped in the opening round and looked to be heading towards his third loss in the pros before brilliantly fighting back to earn a stunning win that will be talked about for many years to come.

After a fight with WBA ‘Super’ Champion Leo Santa Cruz failed to transpire, in an incredibly gutsy move, Wood has chosen to prove himself against one of the most feared knockout artists in world boxing.

‘Bronco’ rematched Warrington in front of a sold-out Headingley Stadium in Leeds seven months later, but a nasty cut over the left eye of the Mexican in round two caused by an accidental clash of heads resulted in the contest ending in a technical draw.

The power-punching 24-year-old blitzed Emilio Sanchez in three rounds earlier this year on the undercard of Roman Gonzalez vs. Julio Cesar Martinez in another destructive show of brute force to put the 126lbs division on notice.

‘Maximus’, who is undefeated since November 2019, landed the IBO crown with a shutout points win over dangerous Mexican Jovanni Straffon in September last year before making a successful first defence against Ryan Walsh in March.

Galahad will be looking to return to winning ways up at Lightweight after suffering a shock knockout loss to Spanish veteran Kiko Martinez in what was supposed to be a routine maiden defence of his IBF title at the Sheffield Arena in November 2021.

Denaby Main’s Terri Harper (12-1-1, 6 KOs) leaps up in weight to challenge Scotland’s Hannah Rankin (12-5, 3 KOs) for her IBO and WBA Super-Welterweight World Titles in an intriguing England vs. Scotland clash.

Former IBO and WBC Super-Featherweight World Champion Harper lost her titles at the hands of the USA’s Alycia Baumgardner on the undercard of Galahad vs. Martinez last year before landing the WBA Intercontinental Lightweight Title against Yamila Belen Abellaneda in March.

Rankin captured gold by decisioning Maria Lindberg over 10 rounds at the Tottenham Hotspur FC Banqueting Hall in November 2021 before defending her belts against Mexico’s Alejandra Ayala at The SSE Hydro, Glasgow in May.

“I maybe have a handful of fights left and I want them to be my biggest,” said Wood. “I want to be tested. I’m filling arenas now and I want to keep that momentum going. Every fight should be a step forward, not backwards. Mauricio Lara is dangerous but high risk high reward, I’m confident I can do what Josh Warrington couldn’t do and get the job done.”

“I’m very excited,” said Lara. “This is the opportunity that I have worked so hard for and I am not going to miss it. I am aware that Leigh Wood is a great fighter, but no one is going to take away the possibility of me becoming a World Champion. I’m going to England for the third time and it’s like I’m fighting at home.”

“This is an unbelievable fight and Leigh Wood has massive cojones for stepping up to the plate again in Nottingham,” said Matchroom Sport Chairman Eddie Hearn. “Last time out he gave us one of the most dramatic fights for many years and fans can expect all the drama again on September 24. It’s a huge card with Terri Harper stepping up the divisions attempting to become a two division champion against Hannah Rankin and a brilliant Yorkshire derby for the IBO title between Maxi Hughes and Kid Galahad with lots more to be announced. Expect another incredible atmosphere at the Nottingham Arena on September 24.”

“This is an all-action card from top to bottom and a great way to kick off our UK autumn schedule,” said Joe Markowski, EVP at DAZN Group. “Wood vs. Lara will be an absolute humdinger of a fight and in Hughes vs. Galahad and Rankin vs. Harper we have two fights that are worthy of headlining shows by themselves. Do not miss this fight night! Live and exclusive, on DAZN.”

Matchroom Fight Pass members will be able to purchase tickets from midday on Thursday August 25. Priority ticket info will be emailed directly to eligible members ahead of the on sale time.

General Sale tickets can be purchased via Stage Front and Motorpoint Arena Nottingham from midday on Friday August 26.