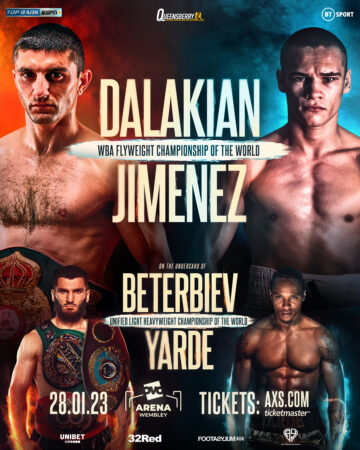 The WBA world flyweight championship clash between the champion Artem Dalakian from Ukraine and Costa Rican challenger David Jiminez will take place in support of the forthcoming Artur Beterbiev-Anthony Yarde blockbuster at the OVO Arena, Wembley on January 28, live on BT Sport.

Ilford man Yarde challenges for the WBC, WBO and IBF world light heavyweight titles held by the undefeated Montreal resident, who holds a record of 18 wins with all 18 coming via a stoppage.

Dalakian, 35, won his world title belt in February 2018 with a points victory over Brian Viloria and has subsequently made five successful defences. He is unbeaten in 21 professional fights, with 15 of his wins coming via stoppage.

Jiminez, 30, has previously won the WBA Latino title and the WBA Gold world flyweight championship and is unbeaten in 12, with nine KOs.

Also on the bill and in title action against opponents to be confirmed shortly, light heavyweight star in the making Karol Itauma (9-0, 7 KOs) will fight for a first professional belt with the WBC International title being on the line and, also at light heavy, Willy Hutchinson (15-1, 11) will battle for the WBO Intercontinental championship.

A clutch of Queensberry’s top young prospects have secured a spot on the card.

The prospects on parade are 11-times National champion as an amateur, Charles Frankham, who was also a World Youth Championship bronze medallist and winner of gold at the Commonwealth Games and European Championships.

The 23-year-old Charles – known as ‘Boom Boom’ – is currently 6-0 in the professional ranks and making significant improvements under the guidance of new trainer Roger Lee.

Charles’ first cousin, Joshua Frankham, will also feature at Wembley, with the four-times National champion and former England international having his seventh professional fight after illness ruled him out of a November appearance at The O2.

Big-hitting cruiserweight Tommy Fletcher will have his fourth pro fight. The 20-year-old ‘Norfolk Nightmare’ has sent ripples through the division with three mighty knockouts to date, with two of them coming in the first round.

Last time out in November he poleaxed the Czech Jiri Krejci with a punishing left uppercut to close his show at The O2.

The 5-0 featherweight Umar Khan, 20, returns to action after impressing at York Hall in November with a shutout victory over Alexander Taylor, along with the hugely popular Brick Lane southpaw Khalid Ali.

The 4-0 ‘Bengal Tiger’ was last in the ring back in September when he outpointed Dario Borosa via a 60-54 margin at York Hall.

Another welterweight, Sean Noakes, will have his fourth fight as a professional after a successful first year of three four-rounders that resulted in two shutout victories and a second round stoppage for the Maidstone man.

Tickets for Beterbiev vs Yarde at the OVO Arena, Wembley on Saturday 28 January 2023 are on sale now from AXS.com.