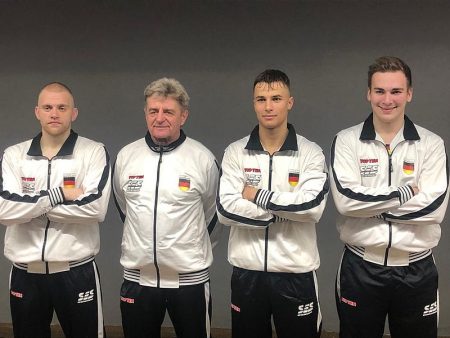 Set the mark for the future now!

“Team Germany” with its captain Roman Fress and three-time junior world champion Michael Eifert at the top wants to continue its success story – a total of nine fights with “Team Germany” boxers, including three newcomers, are planned!

Shortly before Christmas, SES Boxing wants to send an optimistic signal for the future of German boxing with the “X-MAS FIGHT NIGHT” on December 18 in the Maritim Hotel Magdeburg .

The “Team Germany” with the captain Roman Fress and the three-time junior world champion Michael Eifert at the topwants to present itself again this year. Young SES boxing professionals from the “Team Germany “, including the three newcomers Max Suske, Tim Vößing and Joscha Blin , want to prove themselves in title fights and as professional debutants and thus continue the success story of the SES boxing project .

Further information on the title fights, the other pairings, also with the new “Team Germany boxers”, will be announced separately in the next few days!

Attention: This SES box gala is organized under the current conditions of the SARS-CoV-2 containment regulation for Saxony-Anhalt with the requirements of the “2G + access model”.