Xu Can & Leigh Wood make weight ahead of tomorrow in England 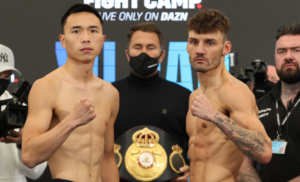 Xu Can vs. Leigh Wood Weights

Leigh Wood was in the best shape of his career on the scales as he weighed in ahead of his world title clash with Xu Can tomorrow night.

Wood (24-2, 14 KOs) challenges Xu Can (18-2, 3 KOs) for his WBA featherweight title during the launch of Matchroom Fight Camp this weekend, live on DAZN.

The weigh-in took place on Friday, with Wood tipping the scales at 125lbs 5oz, while defending champion Can was slightly lighter at 125lbs 3oz.

Wood is looking to build on his impressive stoppage win over Reece Mould back in February, where he knocked out the previously unbeaten opponent to claim the British featherweight title.

The Nottingham boxer also has stoppage wins over the likes of David Oliver Joyce and Ryan Doyle in his career, and now steps up in competition to take on Can.

It will be Can’s first fight since back in November 2019, when he made the second successful defence of his WBA world title with a unanimous decision win over Manny Robles.