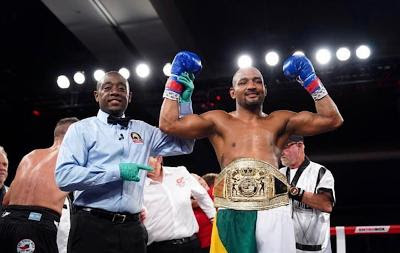 NABA super middleweight champion Yamaguchi “The Problem” Falcao will defend his title against heavy-handed Ernest Amuzu, on Sunday, December 11 at the Caribe Royale in Orlando, FL.

The fight takes place as part of the WBA KO Drugs card, which precedes their annual convention. Tickets from $40 are on sale at Ticketmaster.com and the card airs live on CBS Sports Network at 7 PM eastern.

Doors open at 4 pm and the opening bell will sound at 5.

Fighting out of Florida by way of Brazil, Falcao’s 23-1-1 with 9 knockouts. The skilled southpaw is the current NABA and WBC Latino champion. He’s ranked 8th in the world by the WBC and is one of boxing’s most avoided fighters. On October 29, Falcao retained his NABA and WBC Latino titles with a one-sided beatdown of Alex Tehran.

Falcao-Amuzu is scheduled for ten rounds.

“This is Yama’s fifth fight of 2022 and I applaud Amuzu for taking the fight,” said Falcao’s promoter Jody Caliguire. We’re going to keep moving up the rankings so these top fighters will either have to fight us or vacate their belts. “I’d also like to let it be known Team Falcao immediately accepted a fight with Jaime Mungia for November 19, but they changed course on us and instead faced an overmatched opponent.

With a victory over the tough Amuzu, Falcao should move further up the rankings and would love a shot at the most dangerous champion at 168 pounds.

“David Morrell is very talented and nobody else in the division seems willing to face him,” said Caliguire. “We’d fight Morrell in his adopted hometown of Minnesota or anywhere in the world because we truly want the best!”