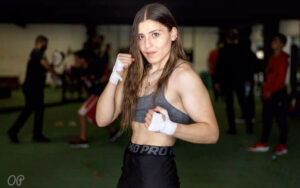 One of the questions which needs to be answered, is just how Yeimi`s “Schnozzola” will fare? In her last fight, which was a non title bout, her nose was fractured in two places in the second round, during an accidental clash of heads with Irasema Rayas. Fighting on through intense pain and a copious blood flow, the champion upped gears and TKO`d her opponent in one minute and thirty six seconds of the fourth round. That was back in September, so there`s been time to heal.

Aged just twenty two, and from Hermosillo, Sonora, Yeimi (16-2, 5 KO`s) has already notched up a fair portion and degree of experience. Her pro debut was in 2014, and less than two years later, she fought Jessica Munoz for the vacant WBC Fecombox super bantamweight crown, losing by UD. During the next year two wins and three more in 2018. In her fourth bout during that year, Yeimi audaciously went all the way to the Kenyatta International Convention Center in Nairobi, Kenya to take on WBC Champion Fatuma Zarika. She lost by a split decision, but quickly bounced back to win the vacant International Title, defeating Alys Sanchez by UD, notching another UD victory in her first defense against Karina Fernandez.

then in 2019, she fought her heart out to defeat Zarika by UD in Cuidad Cuauhtemoc, Chihuahua.

Great preparation for this upcoming championship defense. Yeimi has shared a training camp with Miguel Berchelt and Juan Francisco Estrada in Los Mochis. The trio have been put through their paces by seasoned coach Alfredo Caballero. Yeimi has sparred with both of the other two world champions.

Tall, tough and resolute, Julissa Alejandra Guzman, nicknamed: “La Roquera” aims to lead Yeimi on a merry dance. Aged 24, from Cuidad Obregon, Sonora with a record of 11-1-2, with 5 KO`s. That loss was her pro debut in 2015, against Yolanda Vega. Since then there`s been improvement. Her only fight outside Mexico was a UD victory in Quito against Erika Cedeno. Alejandra is unbeaten in her last thirteen contests, over a five year span, having a seven fight winning streak. This championship bout, has all the makings of an excellent contest, between two tough Northerners.

On This Day: Konstantin Tszyu Defended His WBC World Title WBC Champ Ilunga Makabu Aims for Another Defense in the Congo