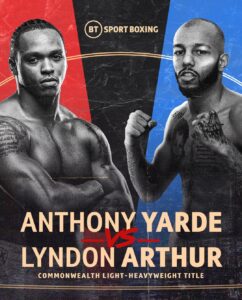 It has been a great story and I’m glad we are going to church on Saturday! I am really looking forward to it. I look back over the years and the first fight I did was a light heavyweight fight between two world ranked American fighters at the top of the bill. When I look back I thought we would do some tickets and have a real big crowd, but the place was empty – you could have fired a machine gun and wouldn’t have hit anyone! 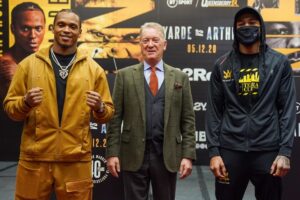 Here we go, we are back again on Saturday with no people there. It is very ironic, but for different reasons. If we could have sold tickets for this one, could you imagine, it would be a burster and they would be knocking down doors to get in.

I’ve had my ups and downs over the years, I’ve enjoyed it, I’ve made some good friends – a couple of little enemies along the way, but mostly friends – and it doesn’t even feel like 40 years, so I am looking forward to the next 40.

I am delighted over where we are and I am delighted to be promoting this fight between these two guys. I love the sport, it is the most amazing sport of all. Fighters are unique sportsmen and it is a privilege to be around them, at least most of them. You look at what they have to go through to fight, the sacrifices they make with their youth and not being able to do what most youngsters do. They sacrifice these things because they are looking for better things in life. to make their families comfortable and to secure their futures – in probably the most challenging of all sports. 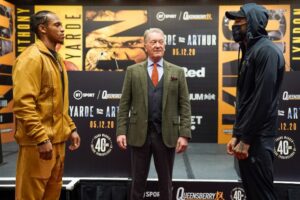 It is not like football, tennis or golf where, if you get beat you play again the next week. Fights bring about career-defining moments and that is why you’ve got to take your hat off to these guys. They are on the top pedestal of all sportsmen.

We had a show last Saturday at Church House and it was a great fight. This will be the same. You look at the styles, the records, the will to win and determination both these guys have got. What it says all over it is ‘fight’ and that is what you are going to get, a great fight.

We arranged to do it back in April and for obvious reasons it didn’t happen, but here we are today getting the fight on.

I’ve watched him go through the gears with the opponents he’s faced and, with being from the same promotional team, it has always made sense for us to fight. We’ve both been winning, both been doing our thing, we’re both British and, as everyone says, it makes for a great British dust-up. That is what it is going to be on the night. 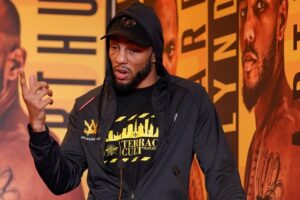 It is exciting times, I am excited to get in there and excited to see what’s going to happen on the night. I wanna test myself against what is supposed to be the best in the business, so let’s get it on, let’s do it. Why would I be here if I didn’t think I would win.

We will see what happens on the night but I believe I am better and I believe I will win. I am not here to make the numbers up or be an opponent. I might be on the B-side right now but I am here to change that. I feel like I am special.

It is boxing, it is a compliment he wants to fight me and he will tell you himself I have done nothing but entertain and have done more than what was expected of me. That is how I’ve got to the level I am at so for me on Saturday night it is about doing the same thing. Being a better Anthony Yarde, being entertaining, being explosive and as smart as I can be. 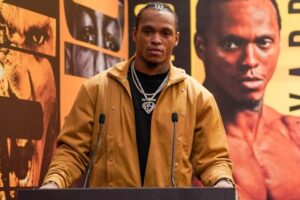 Let’s just wait and see but, to be honest, I think I have shown that no-one can keep me off even at the highest level. When I start pressing I can press but, again, it is about learning – I’m sure he is still learning as well – and about putting on the best performances. I am definitely looking forward to the future.

I just feel like it is another one of those things [the Kovalev fight], challenging myself mentally. I never envisioned anything like that happening because I was extremely confident and what I have been through this year is conditioning of the mind. To be mentally and physically focused and as strong as possible.

A lot of people couldn’t be here with what I have been through this year. Again, I didn’t make any excuses and just got back in the ring. It is ‘Lions in the Camp’.

I am one of these people who takes nothing for granted. Each time I can get in a boxing ring and do this as a professional I just thank God. It is about making the most of it, having fun and, as I said before, it is about being explosive, being entertaining and being smart.

I am supremely confident in my abilities. He has said it about me over who I have fought and, again, styles make fights and I am not going to be there to be eating jabs or anything like that. I fought someone with one of the best jabs in the business and it was only later on in the fight when I needed to win by knockout that it told. With that experience my focus is to be even smarter, even better and you learn from your mistakes.

In other bouts, Michael Ramabeletsa (18-17, 8 KO’s) and unbeaten Chris Bourke (8-0, 5 KO’s) meet for the WBC International super bantamweight title. Bantamweight Dennis McCann (7-0, 5 KO’s) takes on Pedro Matos (7-3) over eight rounds. 2016 Olympian Muhammad Ali has his second fight in the pro ranks and there is a debut for Olympic Youth gold medalist Karol Itauma.