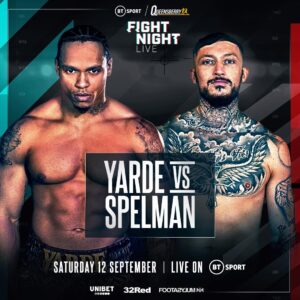 Fight Notes: Even fight so far. Spellman outworking Yarde but Yarde starting to land the bigger shots. Spellman down round 6 and referee stops the fight. Spellman not happy with stoppage. Time was 2:42 of round 6.

Fight Notes: Even first round. Heffron down round 2 from a straight left. Left hand is the Bentley danger shot that is connecting. Heffron back in it. Even fight. Heffron connecting big with right hands in round 9. Even fight.

Fight Notes: 1 point taken from Ali in round 3 for repeatedly holding. Score was 39-37 from referee Marcus McDonnell. The incorrect winner was initially announced by the MC.