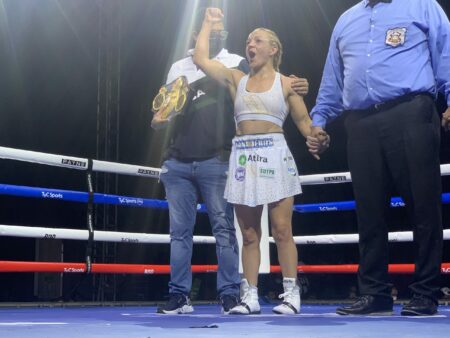 The Argentinean showed her aggressive style in her return to the division after having fought a bantamweight non-title bout a month ago. It was important for “Tuti” such a resounding victory after a long time without defending her crown due to the pandemic pause.

In the first round, the champion had to adjust to the challenger’s style. Bopp came out with a lot of momentum and got a rival dodging well and hitting in counterattack, so she could not do her usual boxing.

However, it was not difficult for the Argentinean to correct details and from the second round she was able to decipher Zúñiga and began to put good punches to knock her down at the end of that round. Bopp also dominated the third round until the fourth round when she knocked down the Venezuelan again and the referee decided to stop the fight.

Bopp won her 37th fight of her career, while she has 2 defeats and 17 knockouts. Zuniga lost her undefeated record and now has 16 wins, 1 loss and 9 knockouts.