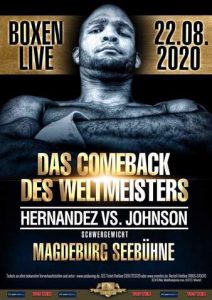 Yoan Pablo Hernandez: “I’m looking forward to an experienced opponent like Johnson. I’ll make everyone happy with a surprise on Saturday! The greatest burden, the weight, is now gone. Everyone knows how painful that can be. I’m free of it now – I’m looking forward to my pasta with scampi!”

Six years after retiring, 35 year old former IBF cruiserweight champion Yoan Pablo Hernandez is making a boxing coming back and at heavyweight. He will return on Saturday August 22 on Elbau Park’s floating stage in Magdeburg, Germany and is named “The Comeback of the Undefeated World Champion.”

With a boxing record of 29-1 (14 KOs), he retired as the current champion making four title defenses until hanging up the gloves. There were a series of illnesses, injuries and coupled with operations, he decided to call it a day.

With his proven boxing pedigree, he will be a welcomed addition to the heavyweight mix if has continued to ‘live well’ in the sports absence.

Whilst Johnson (as always) will be viewed by most as a safe ‘opponent’, this will be the perfect introduction to the heavyweights especially after a six year layoff. Only time will tell…