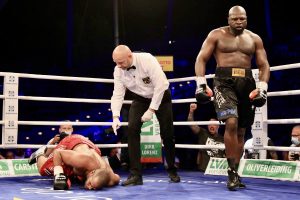 Yoan Pablo Hernandez (29-2, 14 KO’s) is to continue boxing despite his shocking induction to the heavyweights as he suffered a HUGE KO loss to Kevin “Kingpin” Johnson in the 7th round on Saturday (22/8). “A defeat doesn’t matter. After a defeat you can go on” he told MDR.

40 year old former heavyweight title challenger Johnson who was on a roll of losing his last 5 bouts, came out more aggressive than usual to spoil the plans of the then once beaten former cruiserweight champion Hernandez.

From the offset, Johnson stalked the 35 year old Hernandez making his comeback dropping him in round 4 and then on the floor for good at the 2:00 mark of round 7.

At what weight he will continue at is unknown and if it will be at heavyweight, that will be a brave decision.