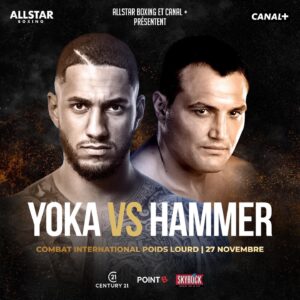 Yoka defeats Hammer & full results from a full fight card from the H Arena in Nantes, France. The headliner was the 2016 Olympic Gold medalist Tony Yoka and his wife, Estelle Yoka-Mossely.

Fight Notes: Sokolowski was down in round three with the scores 60-53, 60-53, 60-53 for a Faust points victory. Unbeaten heavyweight Faust had to go the distance for the first time.

Fight Notes: Bechelaghem was initially declared the winner but as the controversy started and protests from the Gokcek team, the decision was corrected for a Gokcek split decision points victory. The scores were 59-55 for Bechelaghem, 58-56 and 58-56 for Gokcek. Junior welterweight Gokcek just scrapped past this bout that was made at junior welterweight.

Fight Notes: Female lightweight bout. Scores were 80-72, 80-72, 80-72 for a Yoka-Mossely points win. Gongora was a late substitute. Yoka-Mossely is the wife of heavyweight Tony Yoka who fought in the main event.