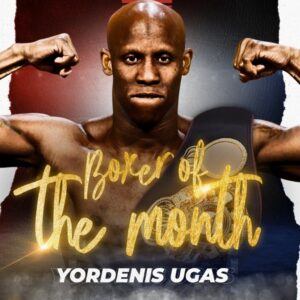 Cuban Yordenis Ugás was named Boxer of the Month by the World Boxing Association (WBA) thanks to his great performance on August 21st against legend Manny Pacquiao, while Joshua Franco received the Honorable Mention for his victory over Andrew Moloney.

The pioneer organization released its August rankings with many important changes, like the fact that all interim championships became vacant and Gold champions are no longer on top of the lists, but occupy a spot in the rankings.

Ugas reaffirmed himself as the WBA Welterweight Super Champion by retaining his belt for the first time against Pacquiao at the T-Mobile Arena in Las Vegas. The Cuban boxer used a perfect strategy to limit the Filipino’s attack and was able to win a unanimous decision in a historic fight for Cuban boxing.

On the other hand, Franco defeated Moloney on August 14th in Tulsa, Oklahoma City. The San Antonio native fought for 12 rounds to retain his Super Flyweight belt and thanks to his victory he was now named mandatory challenger to the winner of Juan Francisco Estrada and Roman Gonzalez, who will fight for the 115-pound Super Championship in the near future.

It was a month of hard work for the Championships Committee and President Gilberto Jesus Mendoza. The changes are reflected in the rankings, whose details can be seen in the corresponding section of the WBA website.