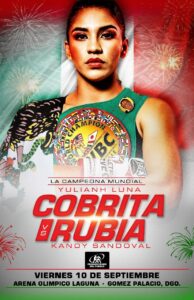 Luna Ávila, won the Green and Gold title by defeating the legendary Mariana ‘Barby’ Juárez in a war. She has 21 victories as pro, and five victories in a row, so now she`s ready to face a fighter who is distinguished by her dedication and bravery, characteristics that she herself has shown throughout her career.

The boxer represented exclusively by Promociones del Pueblo, prepares her second fight of the year after giving an account last April of the Guanajuato Bárbara ‘La Leona’ Martínez; always with the confidence, coached by her father Julio Luna.

Maxi Hughes: I didn’t see this coming a year or 18 months ago “The Big Belt Championship” in Texas, USA on September 17