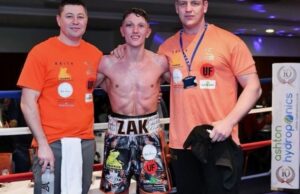 Zak Miller stole the show last time he fought in Sheffield. In December last year, on the UK’s first ever drive-in boxing show (put together by Dennis Hobson and Steve Crump), Miller blitzed the usually very durable journeyman, Michael Horabin, in less than a round to move to 3-0 (1) and earn himself a Fight Academy contract.

Next up for Zak, 24, is another ‘Steel City’ outing on the undercard of a great evening of boxing, topped by Kash Ali‘s tilt at the IBF European Heavyweight Title against Czech fighter Tomas Salek, live on Fightzone.

With just a solitary disqualification loss on his 19 fight record, Ali is ready to move onto the next level against Salek in his hardest test to date.  The East European doesn’t stop coming forward … and he can hit!  The 22-year-old has tasted defeat just twice in 17 contests and, with 21 big KOs between them, this is a heavyweight clash not to miss!

“He can whack, and I know I have knockout power,” said Ali.  “It’s going to be a case of whoever lands first will get the KO – and I can promise you it’ll be me!

Ahead of the show, we caught up with Ashton under Lyne’s Zak to get the lowdown on what makes him tick…

What are your strengths and weaknesses as a boxer?
My strengths are my dedication, fitness and I’m a good listener.  Weakness? I don’t know when to rest!

How would you describe your fighting style?  What can fans expect?
I have a very neat, high pace style, and great footwork and shot selection!

What’s the hardest thing about being a pro fighter?
Having to work along side being a pro.

What weight do you see yourself winning belts at?
Featherweight

Which current British fighters are impressing you the most?
‘Jazza’ Dickens, Liam Taylor and Brad Rea

What is your favourite meal?
A massive Chinese after a fight

Favourite film?
Stand By Me

Which actor would you choose to play you in a movie about your life?
Jason Statham

Your job outside of boxing (if you have one)?
Despatch Operative

Your boxing ambitions?  What do you want to achieve in the sport?
Become a world champion …

Who is your biggest inspiration?
My mum.

Tell us an unusual fact about yourself?
I was a former member of the Team GB athletics/cross country team.

What is the first thing you’d buy if you won the lottery?
A fishery with accommodation in the South of France.

Where do you see yourself in five years time?
I see myself in the prime of my career with a few titles to my name.

How pleased are you to be teaming up with Dennis Hobson and performing on Fightzone?
I’m over the moon for this opportunity and can’t wait to showcase my skills on Fightzone!  Everyone is in for one hell of a journey and I know I can reach the top of the game with the team I have around me, one hundred per cent.