PROBABLY FIGHT OF THE YEAR 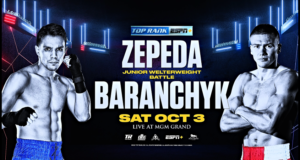 Fight Notes: Zepeda was down in rounds one (twice), two and five. Baranchyk was down in rounds two, three, four and five for the full count at the time of 2:50. The fight is surely fight of the year with the bout made at lightweight. 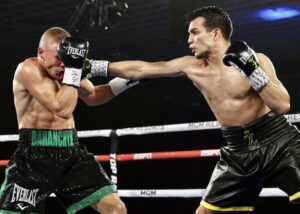 “I feel great because I won the fight,” said Zepeda. “It was a hard fight, and I’m thinking, ‘Man, boxing is hard. It’s no easy game.’ Boxing, it’s tough, and you have to give it 100 percent because it’s a hard sport.”

“Both of us are climbing up, and somebody had to stay. I was able to win the fight, and I told him, ‘Thanks for the fight. It was a great fight.’” 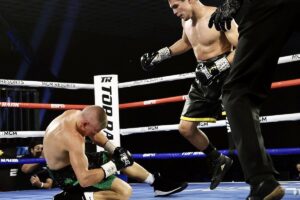 “I know I’m tough. I didn’t know how tough I was. Tonight, I showed myself, too. I’ve never been in a fight like this. It was a great learning experience.”

“I’m going for the titles. That’s why we’re here in boxing.”

(FOR A PICTURE COLLAGE GO TO THE BOTTOM ON THE PAGE)

Fight Notes: Time of the stoppage was 0:43 of the first round over 290 lb Barnes. Sipe was making his pro debut with the bout made at heavyweight.

Fight Notes: Time of the stoppage by referee Russell Mora was 2:27 with the bout made at featherweight. Karyah was deducted a point for holding in round four. Brady Jr. was making his pro debut.

Fight Notes: Time of the stoppage was 1:27 of the first round. The bout was made at welterweight.