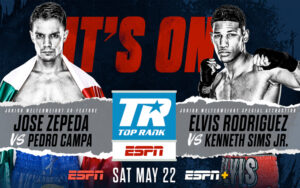 “The current and future stars of the super lightweight division will be on this great card on May 22,” said legendary Top Rank promoter Bob Arum. “José Zepeda is one of the best 140 pounds in the world and he will have the opportunity to cement his status against Pedro Campa. Elvis Rodríguez is a future world champion. Kenneth Sims Jr. will not be an easy opponent, but we believe this is the ideal next step for Elvis as he continues to develop. “

Zepeda (33-2, 26 KOs) is coming off a spectacular fifth-round knockout win last October over former world champion Ivan Baranchyk, in which he was declared “Fight of the Year 2020” and featured eight total knockdowns that culminated in with a withering blow that ended the fight.

“I’m ready!” Zepeda said. “After my ‘Fight of the Year’ with Baranchyk, I’m better than ever. It is only a matter of time before I become a world champion. “

Rodriguez, trained by Freddie Roach (11-0-1, 10 KOs), is one of the young elite talents in boxing, has had 5 victories in “The Bubble” at MGM Grand Las Vegas, including four knockouts in three rounds. He travelled the distance for the first time in his career on February 20, beating Argentine veteran Luis Alberto Verón by unanimous decision in eight rounds. Sims (15-2-1, 5 KOs), who lost to José Ramírez by one point at the 2012 United States Olympic Trials, has sparred with fighters like Manny Pacquiao and Jorge Linares. His losses have come from close decisions to Rolando Chinea and Samuel Teah, but he has won two matches in a row since the 2018 unanimous decision verdict against Teah.

The undercard presented by Top Rank will be televised on ESPN.