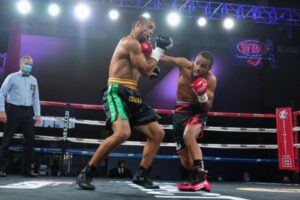 Undefeated prospect Danielito ‘El Zorro’ Zorrilla (14-0, 11 KOs) showed that he is already more than ready for elimination bouts that lead to a coveted world championship opportunity after dispatching Colombian Rodolfo ‘Tsunami’ Puente (19-5-2, 15 KOs) by knockout on Saturday afternoon during the main event of the DIRECTV Boxing Nights poster at Pedrín Zorrilla Coliseum de San Juan in presentation of Miguel Cotto Promotions and H2 Entertainment in association with Golden Boy Promotions.

“We are very excited that boxing is back in Puerto Rico we did it! Nine long months. We had a great show and solid wins form our top future champions on Danielito Zorrilla and Oscar Collazo, Golden Boy and us have big plans for them, they are the next Puerto Rico generation”, Miguel Cotto said.

“I want first-rate rivals. I’m ready now! I want competition. I want opponents ranked in the top 10 to help me get a world championship fight in 2021, “said Zorrilla, after finishing Saturday’s evening, which represents the return of boxing live in Puerto Rico with the endorsement of the Sports and Recreation Department after eight months of absence.

“I am already 27 years old and I don’t want to wait much longer. So I came determined to show that I am ready for the big names. Let the contestants line up for me.”

Zorrilla clearly made his argument known above the ring after deciphering Puente’s defense in the middle of the first round and then began with his attacks to the face and body until he defeated the Colombian in the second round with a powerful combination of straight left and upper of right that took him to the canvas for the regulation eight-second count.

Later, Zorrilla caught Puente in a corner just before the round was over and hit another strong fastball that sent him to the canvas and under the ropes. But even though Puente was back on one knee for the second six, his body language indicated that he didn’t want to spend any longer in the ring taking punches and decided to stay down until the 10 count.

“He made a smart decision to stay down. There was no need for him to take any more punishment. Boxing is not a game,” said Zorrilla, who is currently the 140-pound NABO champion and is ranked 12th in the World Boxing Organization rankings.

“The work plan came out as I wanted. I studied him well for the first two minutes of the fight to look for his holes and as soon as I connected him solid I made him stagger. I knew he felt my hands. Even my jabs hurt. But I had to be a little cautious because he is a “scolding” fighter who hits hard and I couldn’t risk taking a bad blow. He has 14 knockouts in his 18 wins for a reason. But once I figured it out I knew it was mine.”

Another who also proved to be prepared for bigger challenges was the Pan American gold medalist Oscar Collazo (2-0 with 2 KOs), who took rookie Kevin Cruz (0-1) out of the race in just one round after knocking him out during the semi-star fight of the night.

Cruz came out aggressively to exchange with Collazo, but the sought-after prospect took the better part and with a combination of a right straight with a left hook brought his opponent to the canvas and under the ropes.
Cruz surprisingly recovered before the count of 10 but the referee Luis Pabón did not find him in optimal conditions to continue the match and stopped him.

“The plan was to take it round by round. If the knockout comes, it came. Fortunately, my hands came early and I landed him with a right hand that staggered him. My corner asked me to press him and after taking four or five punches and we decided to attack him with strong hands. That’s where the knockout came,” said Collazo.