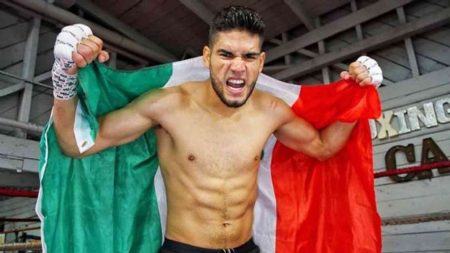 In addition to Zurdo, LA fan favorite and former IBF Super Featherweight title holder Joseph “JoJo” Diaz Jr. (32-2-1, 15 KOs) and undefeated, rising lightweight division star William “El Camarón” Zepeda (26-0, 23 KOs) discussed their upcoming 12-round, crossroads fight set to take place at the Pechanga Arena San Diego on Saturday, Oct. 29 on DAZN. Alexis “Lex” Rocha (20-1, 13 KOs), who will be on the Diaz, Jr. vs. Zepeda undercard, also participated in the media roundtable and will face a soon-to-be-announced opponent in a 10-round welterweight fight to defend his NABO title.

Here is what the fighters had to say:

“I’m very excited because I know William Zepeda is a young, hungry fighter that is 26-0, with 23 knockouts and I know he is going to try bring it his all.

“This fight represents everything to my career right now. I’m coming off a defeat against Devin Haney. Unfortunately, the fight didn’t turn out the way I hoped.

“I’m ready to showcase everyone why I’m considered one of the best fighters in the world.

“I think William Zepeda is a one-dimensional fighter that is just going to apply a lot of pressure. If he thinks that I’m going to be the type of guy that is going to back away and shy away from any type of smoke, he got me [expletive] up. I’m going to be out there throwing as much and he is throwing.

“I am very excited and very content about being able to participate in a match where a great fighter fights another great fighter.

“If I get the win against JoJo, this would be a great way for people to get to know me – a grand victory against a great rival who used to be a world champion. They are going to know that “El Camarón” is the best.

“JoJo is an aggressive and dangerous fighter with experience. But I will continue to prepare and train hard. This division is a very attractive and stacked one. We all know that we are all talented.”

“I’m very humbled and grateful for the Mexican-American fanbase behind me.

“This is what I wanted my whole life; the fans, the people, and the public is what I wanted. All those years of grinding since I was twelve years old. I gave up so much and scarified so much.

“People can say whatever about Santa Ana, but if you go to the diamond of the dirt, there are hard workers out there – people like me for example. We are trying to make it out and put our city on the map. It’s a privilege to be from Santa Ana.

“Boxing helped me get out of the danger. I was hanging out with the wrong kids at school, and I knew that if I hung out with them at night I wouldn’t get anywhere. Boxing definitely saved me.”

“I am very grateful to be able to take this fight against Bivol, especially since I am very ready for this. The entire world will see Zurdo Ramirez and all the potential I have.

“At the end of the day, it’s just going to be me, him [Dmitry Bivol] and the referee inside of the ring. No one can help him once he is in the ring with me.

“The hardest fight that one has is the fight against oneself. To rise up and to stay focused, not just in boxing but in life as well.”